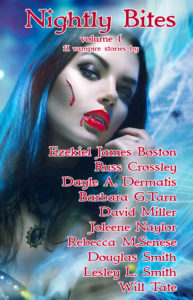 Short stories of and about vampires for those long winter nights…
Past, present, future. Dark or light-themed. Bloodsuckers and psychic vampires. The only common trait is the night creatures – who sometimes can stand the sunlight – for a batch of stories around Earth and beyond.
THE STORIES
“Unnatural Immortal” by Russ Crossley
“Reunion” by Will Tate
“A Study in Scarlet” Lesley L. Smith
“A Fief in Lincolnshire” by Barbara G.Tarn
“The Whitest Smile” by Rebecca M. Senese
“Night at the Alamo” by David Miller
“Blood Relations” by Dayle A. Dermatis
“By Her Hand, She Draws You Down” by Douglas Smith
“Verchiel: Neverending Question” by Joleene Naylor
“Gateway Blood” by Ezekiel James Boston
“Maratha Pride” by Barbara G.Tarn
Universal Book Links – eBook and paperback 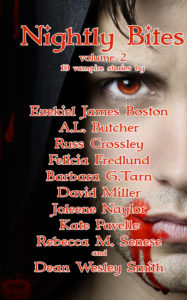 More short stories about vampires mingling in the pages of this anthology. Vampire Apocalypse vs. Last Vampire Survivor. Vampires with hemophobia or Asperger Syndrome. Vampires in the past and in the future, walking through the centuries because they can. Undead but immortal unless you manage to kill them. Merciless killers or merciful death givers – and even a little, shapeshifting vampire who doesn’t feed on blood.
THE STORIES
The Blood is on the Wall by Felicia Fredlund
Bloody Aversion by Rebecca M. Senese
Chuck the Cross by Ezekiel James Boston
Jesslyn by Joleene Naylor
In the Shade of the Slowboat Man by Dean Wesley Smith
Legacy of the Hunted by Russ Crossley
The Raven by Barbara G.Tarn
She-devil of the Spanish Main by David Miller
So Many Nights, So Many Sins by A.L. Butcher
The Aswang Who Ate Stardust by Kate Pavelle
Universal Book Links – eBook and paperback 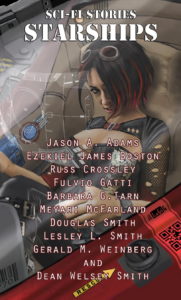 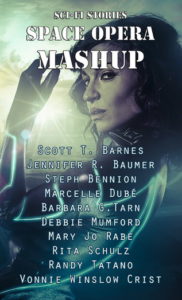 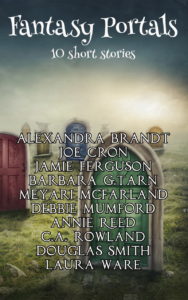 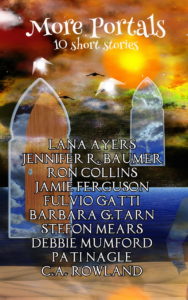 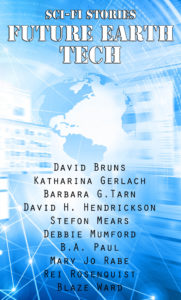 The future of our planet and our technology – mind uploads, augmented humans, time travel, solar punk and all the good and bad future technology will bring. Be it post-apocalyptic or futuristic, our future is coming faster than we think.

The stories:
Legacy by David Bruns
Grow Beyond Your Limits by Katharina Gerlach
One Line of Bad Code by Barbara G.Tarn
The Last Woman on Earth by David H. Hendrickson
Scrap me by Stefon Mears
Remembrance by Debbie Mumford
The Quest of Souls by B.A. Paul
Sagan in the Past by Mary Jo Rabe
The Right Resources by Rei Rosenquist
Dancer by Blaze Ward 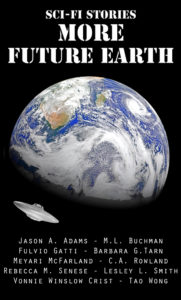 More stories for our future – with less tech, probably, but still life on our planet. Post-apocalypse, dystopia, last men and women usually struggling to survive. Bookstores as treasure troves or abandoned places, factories and cities in various states of disrepair, locations from North America to Europe to Japan, all over our beautiful planet.
The Book Store by Jason A. Adams
The Last Books of Nara by M.L. Buchman
Access All Areas by Fulvio Gatti
Lisa’s Odyssey by Barbara G.Tarn
A Cupboard Full of Seeds by Meyari Mc Farland
The Crossing of the Moons by C.A. Rowland
Imposible by Lesley L. Smith
The Last Maple by Rebecca M. Senese
Alone at the End by Vonnie Winslow Crist 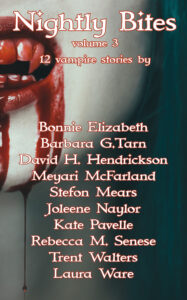 A varied collection of vampire stories from flash to novella-length, from the past to the future. Sometimes they mingle with other supernatural creatures, sometimes they’re the only non-human of the story.
THE STORIES
“Blood on the Ice” by David H. Hendrickson
“Nun Survived” by Rebecca M. Senese
“Job Interview”, “Dracula Makes House Calls” and “Don’t Move” by Trent Walters
“Jamie: Blood of Betrayal” by Joleene Naylor
“The Vampire vs. The High Court” by Laura Ware
“Blood” by Kate Pavelle
“A More Ancient Killer” by Bonnie Elizabeth
“One Who Cannot Be Destroyed” by Barbara G.Tarn
“Young Monster Hunters in Love” by Stefon Mears
“Rebels of Seduction” by Meyari McFarland 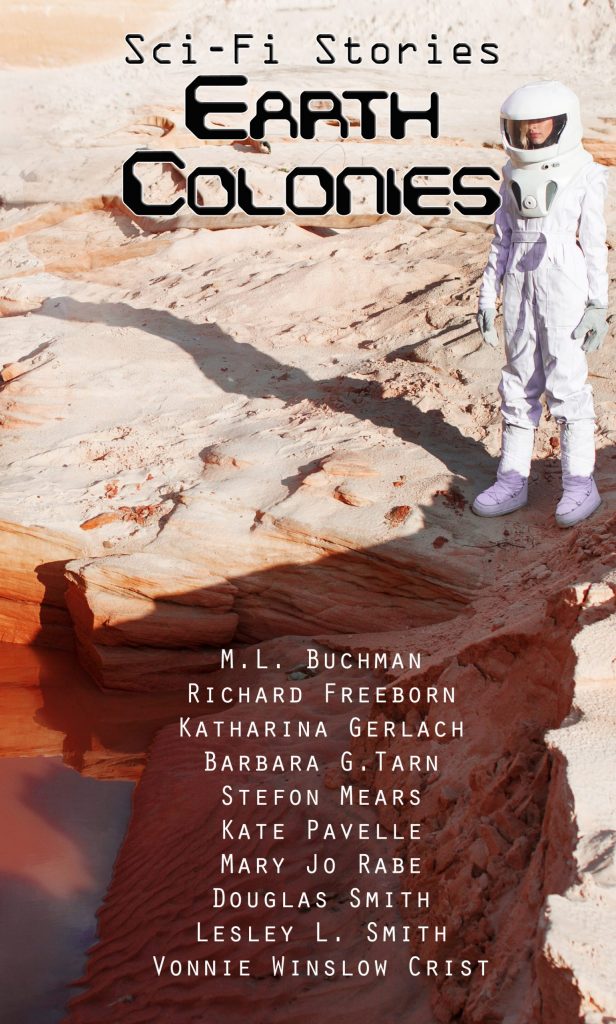 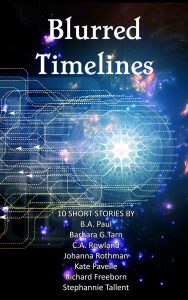 Somewhere in Nevada timelines meet and diverge. Falling in one of those timeslips can change your life forever.
Starting in 1849, thousands of prospectors traveled through Nevada on their way to the newly discovered gold fields in California. Some stopped before reaching the fields. The 1859 discovery of silver ore, known as the Comstock Lode, led to the establishment of many mining towns.
Most of those gold and silver mining towns are gone today. But some are still there, and will be for a little longer, strange places where stranger things happen.
Look out when visiting them, lest you become an accidental time traveler.
The stories:
“Cascading Gold” by Johanna Rothman
“As it Happens” by B.A. Paul
“Jazz Times” by Barbara G.Tarn
“Cold Promise” by Stephannie Tallent
“A Long Way from Dodd’s Pharmacy” by C.A. Rowland
“Sneaking Hootch” by Kate Pavelle
“A Look Like That” by Richard Freeborn
“Life is Good” by Johanna Rothman
“A Gift Through Time” by C.A. Rowland
“Stranger Than a Movie” by Barbara G.Tarn