Welcome to Otherside, a world without a moon, without tides, and with a clockwork, mechanical core. A world of steam-powered science and magic, worshiping Bastet. A world without cats. Because cats turn into humans when they step through the portals to Otherside.

An abandoned cottage, a magical cat tree, a portal to another world.

After her divorce, Jessica moves into a family heirloom, a cottage belonging to her aunt who vanished fifty years ago without trace. Welcomed by a stray cat, or so she presumes, she’ll soon discover things are not always what they look like in the old house.

A novella of cats and women hopping between ours and a steampunk world, a portal fantasy for everyone.

On Earth and Otherside (Otherside Book 1)

Queen Georgina’s triplets were inseparable until the accident that disfigured her favorite, Simeon. Now he hides his face behind a golden mask, and hasn’t gone back to the world beyond the portals for fifteen years. Until now.

Earl and Eliza, his twins, haven’t spoken to him in years, busy with their own lives. The triplets used to be tightly knit. Will they be able to rekindle their bond despite their losses?

Things aren’t easy, on Earth and Otherside. And Simeon’s grief can cause a lot of damage.

The Core of Otherside (Otherside Book 2)

Six months after the end of Book 1, the core stops working and all the clocks stop at the same time. As the world’s rotation slows, experts from all over the world head for the island of the core, a mechanical computer with clockwork and alchemic parts. And they vanish.

In increasingly bad weather, Adele needs to reach the core from Urbe, Charlie from Copper House, Rohan from Dilli. By airship or steam-powered train, they will have to cross continents and the sea to reach the core and fix it, as well as finding out who is doing this to the world.

Three more months have passed since the core broke. Jessica is back in Kenor City with Earl, and Adele is in Urbe, presenting her research. When the king of the United Kingdom of Kenorland dies, Jessica and Earl are free to wander in the royal house on wheels with Adele and Charlie, going around the world and studying cultures that almost vanished when the core broke.

A long journey around the northern hemisphere, meeting people and cementing relationships.

A companion to the books or a standalone, a collection of four stories of Otherside, the steampunk world beyond portals. Whether born cat or human, on Earth or Otherside, these characters move to or through Otherside in search of something or someone with whom to live happily ever after.

The House on Wheels 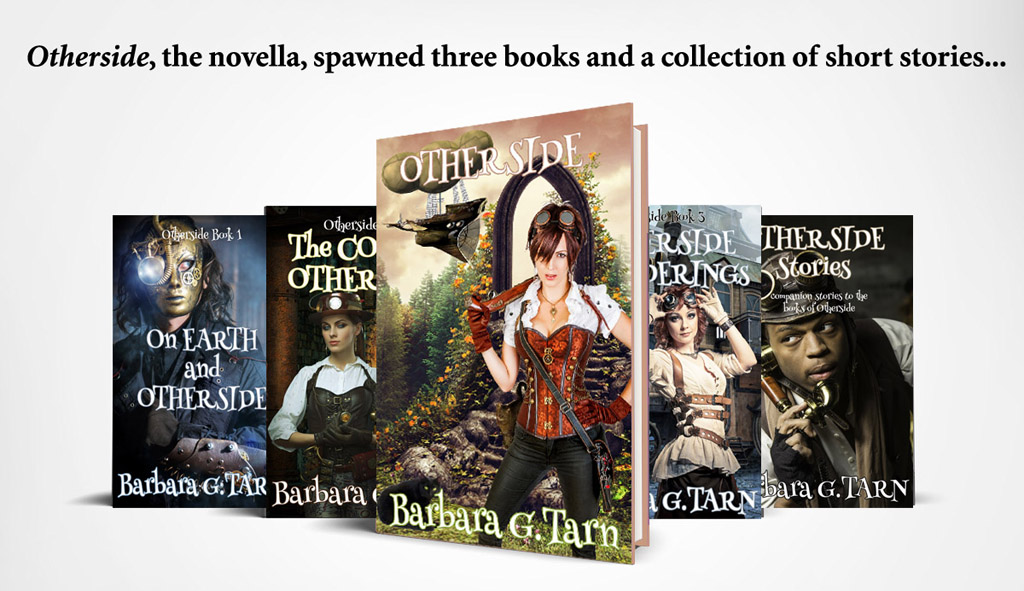