There’s a witch on the loose and she can turn our lives upside down. Samantha enjoys toying with us and she switches bodies at will. That’s the challenge Johnny & Marian, Ciaran & Harith and Pat & Babs have to deal with.
Three novellas with a common denominator: Samantha the witch! Enjoy this humorous tales of body switches. 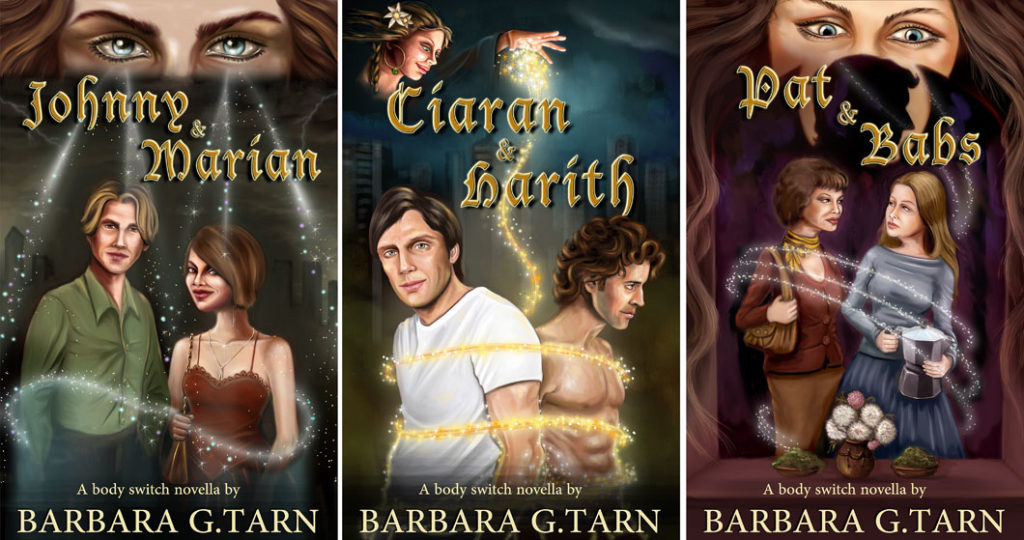 You can find a short story, Samantha’s Day, in the free anthology Strange Portals.

All cover art by Shafali Anand.

She’s also a guest in three novels of Vampires Through the Centuries (Ravjeer, Kaylyn and Shashank).

You know when you check your public transport app and it says the bus arrives in 1 minute, no, NOW! but none appears? You just missed the ghost bus to Elsewhere, where creatures of myth and legend are real and the Elementals rule. Only half-bloods can see the ghost bus and use it to keep the world safe from dangerous creatures trying to trespass in our technological present.

Meet Elena Pace and Krishna Nayar, two Gen X ghost bus riders, with slightly different powers but the same determination in keeping the world free of dangerous magical beings. Watch them fight monsters and demons while trying to uncover the Shadow Elementals conspiracy to take over both worlds. An Exciting urban fantasy novel set between Italy and India.

Meet Jennifer “Jen” Smith and Dalilah Habib-Gallo, two ghost bus riders from two sides of the world involved in the struggle against the half-Shadows. An American Generation X and an Italian-Egyptian Millennial dealing with evil and possibly finding love. A breathtaking ride through NYC and Rome, an urban fantasy novel.

Meet Jayshree “Jay” Sood and Floriana “Flo” Fedele, two Millennials and ghost bus riders with slightly different powers but the same determination to put an end to the half-Shadows threat. Watch them learn from their elders and join forces in the struggle against the half-Shadows. The dramatic end of this intriguing trilogy, an urban fantasy novel set between Italy and India.

In this book you’ll find a few side stories set before the Ghost Bus Riders trilogy, when the characters were younger and more naive.

Seven stories of half-bloods fighting monsters on Earth or discovering Elsewhere. Seven interesting takes on ghost buses and legendary creatures from all over the world.