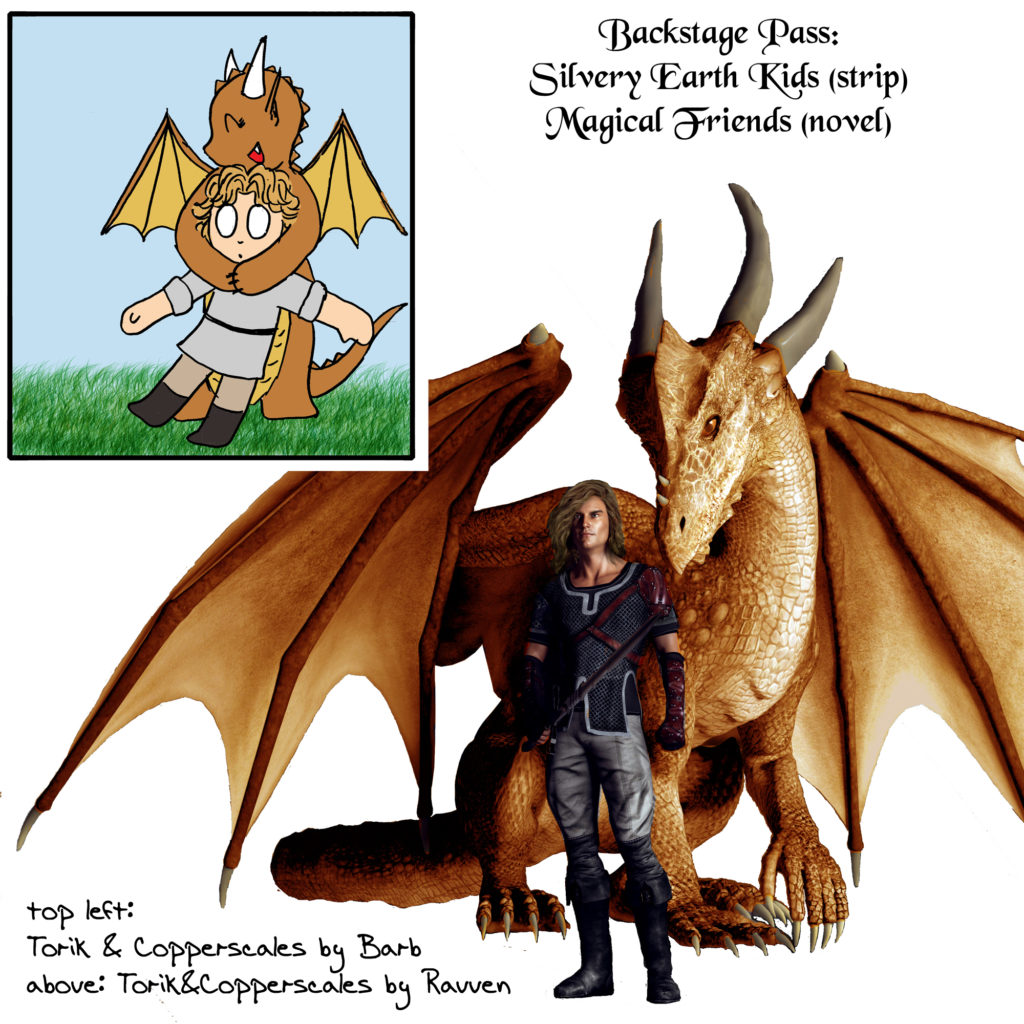 And since Magical Friends is now live, here’s a little extra for you. Because I love Torik and Copperscales and their friends and relatives (so in the image of this post you can see my version and the grown-up version by the awesome Ravven).

These characters were first shown as children in Silvery Earth Kids – the strip  that won’t be available on DriveThruComics after all because they don’t allow uploading square covers and PDFs.

You can check some of the strips on Instagram, and I have a prose version for the visually impaired that went through a proofreader, so… well, the strip didn’t, therefore the language might be more clunky. I thought that since they are children, they could be forgiven if they don’t speak properly.

So, we have the children first, and then they are adults – medieval terms for both, so Child Torik already works as a woodcutter at ten and he’s a widower at twenty-two. But, like Copperscales told him, he’ll live to 50 if he’s lucky. Humans have very short lifespans on Silvery Earth!

So in Magical Friends they’re all adults (except Copperscales, of course, she’s still a dragonette the size of an elephant), dealing with change.

Adwins’s twin sisters barely showed up in the strip, but they became important when I started exploring the future of Torik and Lambert. I hope to write more stories about black heroines, possibly the ones who didn’t leave Nera and stayed in their home country all their lives. A couple of Silvery Earth Heroines are similar to the twins, one a warrior woman, the other with more magical and mystic powers.

I wrote also three short stories as companions to Magical Friends. Two are included in Silvery Earth Kids and Related Short Stories (the prose version of the strip). In Hannibal and the Dragon, ten years after the end of Silvery Earth Kids, Hannibal confronts Copperscales.
Following Torik should have been included in an anthology first, but here you have it to introduce you to Magical Friends, or the start of the novel from Baldric’s point of view (expanded in Torik’s version, since I had to fit Baldric’s story in 5000words).

The last one I’m going to submit to traditional markets, since it would be too much of a spoiler for the novel. And then it will probably appear next year in A Taste of Silvery Earth or a future collection about the northern kingdoms.

Heck, maybe I’ll write about the next generation! Or show Copperscales’s future without short-lived Torik! 😉 So stay tuned for more about Torik, his family and friends way off into the new year!

Tagged medieval fantasy, novel, novella, Silvery Earth, strip
We use cookies on our website to give you the most relevant experience by remembering your preferences and repeat visits. By clicking “Accept All”, you consent to the use of ALL the cookies. However, you may visit "Cookie Settings" to provide a controlled consent.
Cookie SettingsAccept All
Manage consent

This website uses cookies to improve your experience while you navigate through the website. Out of these, the cookies that are categorized as necessary are stored on your browser as they are essential for the working of basic functionalities of the website. We also use third-party cookies that help us analyze and understand how you use this website. These cookies will be stored in your browser only with your consent. You also have the option to opt-out of these cookies. But opting out of some of these cookies may affect your browsing experience.
Necessary Always Enabled
Necessary cookies are absolutely essential for the website to function properly. These cookies ensure basic functionalities and security features of the website, anonymously.
Functional
Functional cookies help to perform certain functionalities like sharing the content of the website on social media platforms, collect feedbacks, and other third-party features.
Performance
Performance cookies are used to understand and analyze the key performance indexes of the website which helps in delivering a better user experience for the visitors.
Analytics
Analytical cookies are used to understand how visitors interact with the website. These cookies help provide information on metrics the number of visitors, bounce rate, traffic source, etc.
Advertisement
Advertisement cookies are used to provide visitors with relevant ads and marketing campaigns. These cookies track visitors across websites and collect information to provide customized ads.
Others
Other uncategorized cookies are those that are being analyzed and have not been classified into a category as yet.
SAVE & ACCEPT