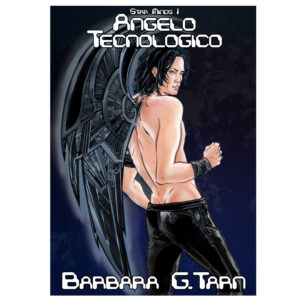 The companion to Star Minds has prequels from different points of view, but also another perspective on the whole series – what really happened to the hybrid called M’aera S’iva.
Cyber Bodyguard
How C’ell’andy lost half of his body.
Galaxy Police
Mya Lylestar as assault team member with her best friend and sister-in-law.
Soldier
Life-changing events for Maela – losing virginity, maternity, maiming and becoming a cyborg.
The Heir
Imperial Princess Lin-sun chooses her husband – with her head and not with her heart.
Unrequited love
Tyro Megnaghy builds the perfect prosthetic wings for a lovestruck prince.
Shooting Star
Heartbroken Kol-ian seeks refuge on Earth.
Mutant
Gaurishankar becomes a were-panther.
Lost Son
Uwe-yuri discovers his son is mind-controlled by his wife.
The rogue years
The adventures of 3.com. And the end of “Technological Angel” from other perspectives.
Half-blood
The real story of M’aera S’iva, half Carian, half Humanoid.