Quests Volume Two: The Paths of Fire and Earth 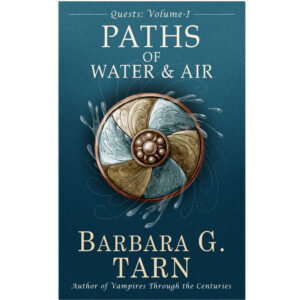 Two Silvery Earth short novels exploring the biggest continent of the world and the very different northern and southern cultures.

The Path of Fire

A young half-blood with blue hair and bat-like wings, pointed ears and yellow eyes, Raykim holds the power of Air and Fire. When he makes rain pour over a gladiator ring, something unexpected happens.

It’s the beginning of a new life, finding friends, moving away from his birthplace and slowly – very slowly – growing up. An engrossing story of coming of age and falling in love. And dragon cubs.

The Path of Earth

Keshav is a thirty-year-old scholar who has been touring the southern kingdom’s libraries in search of knowledge. In Godwalkar he stumbles upon the Genn works and discovers the existence of the Magical Races that populated mostly the north.

An exciting road trip in search of the lost Genn cities, those fabled elf-like beings who had true magic running in their veins.