Today I want to talk about an aborted project – Barb’s Mag. It was supposed to come out in print, bimonthly, but never saw the light of day. Here’s the introduction I wrote for the first issue.

Welcome to Barb’s Mag that explores the worlds of Barbara G.Tarn. This isn’t the very first incarnation of something like this. My very first, completely handmade magazine that lasted 3 or 4 issues on a big notebook, dates from 1980. It was a mix of comics, short stories and supposedly scientific articles on our solar system, based on the research I had done in my last year of French schools in Geneva two years earlier. Late 1970s astronomy.

In 1983 I tried again with something called “Block Notes”, this time using a manual typewriter for the text and there were still drawings and comics. I never finished issue #1.

In 1991 I started Belgariad, fanzine of heroic fantasy and tried to sell it at roleplaying shops in Rome and comic conventions. You can see below how far it went. I had my first PC back then (Windows with Word 3.0 and a b&w screen) and it was a paper fanzine like many others. 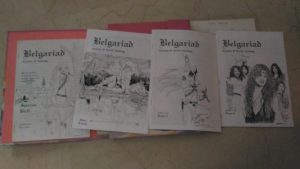 Then in 1996 I started having tables at the local comicon in Rome and I had my “all comic” fanzines… From 1996 to 2003 I tried to sell those paper zines of Kolia&Joris (now available in ebook form as Lovers, revised and adjusted to the new Silvery Earth), The Prince and the Adventurer (now available in ebook form as Prince Splendor, again adjusted to the new Silvery Earth), Mercenaries?!, Fleur de Lys, and again I had a Journal of Silvery Earth (that again lasted maybe four issues? It had a color cover by then). 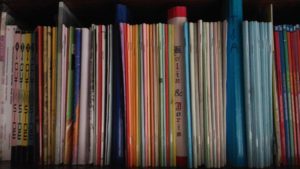 Those colorful zines are now dead and I’m trying again with the new technologies, namely print-on-demand. This mag will bring you insight into the worlds I created through the years and the series that are now populated with these stories.

Each issue will concentrate on a series, sub-series or genre, giving insight into that particular batch of stories – how they’re linked, their timeline, related stories if present and everything there is to know about that topic.

The first story is not tied to any of my worlds and can be considered fantasy on medieval Earth. I wrote it from a Reddit writing prompt, and after being rejected by traditional markets, I gave it to my newsletter subscribers. It is now printed for the first time,

The ToC included two articles, three stories and one comic. The articles were about Silvery Earth and the Assassins’ Guild. The Stories were “Dragon Life”, “The Widow” (included in More Tales of the Southern Kingdoms) and “Fighting Monks School”(included in Kilig the Sword). The comic was a short one about Belfi, the immortal half-blood seen in Beautiful.

I doubted I could sell any copy, considering my abysmal paperback sales, so I just left it there. But if one day fans demand it, know that I’m ready to go! 🙂 For now,  you can have these Backstage Passes on this very page every other week.

If you’d like to read alternate endings or beginnings, just let me know. I might gather all these things in an eBook at some point! Next time we should be back to Silvery Earth, more specifically to the Fairy Tales revisited…

Tagged photocopied zine, Silvery Earth
We use cookies on our website to give you the most relevant experience by remembering your preferences and repeat visits. By clicking “Accept All”, you consent to the use of ALL the cookies. However, you may visit "Cookie Settings" to provide a controlled consent.
Cookie SettingsAccept All
Manage consent